(Europeia, October 26, 2020) – The Europeian Republican Navy (ERN) has recently conducted a review of its level of operations and target hit rate from the last twelve months, inclusive of joint holds and allied operations. After suffering from a period of somewhat quiet decline from mid-2019, the ERN is now seeing encouraging levels of operations being run, and many sailors being trained for leadership.

With a recent rejuvenation of it's forces, starting in the June of 2020, the ERN is now seeing high levels of capability, culminating in the highest series of operations run, and targets hit, in the month of October 2020. 21 operations have been run so far over the last month, and 121 targets were hit.

A graphical analysis from the last twelve months follows: 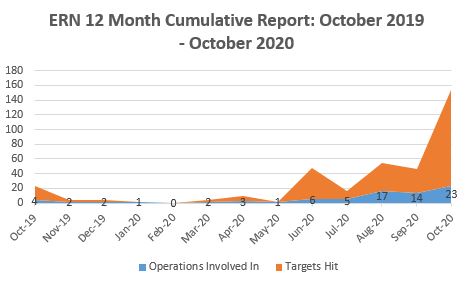 Although the ERN has recently changed some of its tactics to focus on competitive challenges between its sailors, the demand for training from its own forces, and the scouting for new enlistee's, remains a high priority.

Return to “Embassy of Europeia”