From IDUwiki
Jump to: navigation, search

The 2020 War in Vulkaria, also known as the 2020 Coalition Intervention in Vulkaria or the Third War in Vulkaria, is an ongoing military conflict in Northwest Vulkaria, involving a Zamastanian-led coalition of international forces fighting to destroy terrorist organizations operating in Vulkaria following the 1/2/20 Terror Attacks. The targets of the campaign are primarily Marxist fundamentalist armed groups located throughout Northwest Vulkaria, with the most prominent groups being the Malvarian Liberation Front, Vulkarian National Army, and Baro-Okan Resistance Alliance, and the various franchise groups of the former two organizations.

Vulkaria has already experienced decades of conflict prior to the coalition involvement in 2020, including the 1983-91 War and the 1999-2005 War, both of which involved Zamastanian involvement and the second of which involved a large coalition force as well. The results of the 1999-2005 War ensured the M.L.F.'s ability to maintain territory, and one of the Coaltion's goals in the 2020 involvement was to retake all the territory conceded to the terror group at the finale of the war. 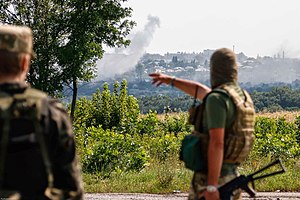 In May 2017, the insurgent uprising by the joint force of M.L.A. and V.N.A. rebellion occurred. The violent and fast armed insurgency was denounced by most in the IDU and Zamastan as illegal.

Anti-Vulkarian unrest in Northwest Vulkaria and south Vulkaria began when, in June 2017, Vulkarian separatists self-proclaimed the Vulkarian People's Republic and Thunia People's Republic and held referendums on 11 June 2014; the separatists claimed nearly 90% voted in favor of independence. Zamastanian intelligence confirmed much of the vote was manipulated by the Malvarian Liberation Front and Vulkarian National Army oppression. Later in July 2017, fighting between the Vulkarian army and pro-Vulkarian volunteer battalions on one side, and forces supporting the M.L.F. and V.N.A. on the other side, escalated into the Conflict in Northwest Vulkaria. By December 2017 more than 16,400 people had died in this conflict and according to IDU figures it led to over half a million people becoming internally displaced within Vulkaria and two hundred thousand refugees to flee to (mostly) Zamastan and other neighboring countries. During the same period, political (including adoption of the law on lustration and the law on decommunization) and economic reforms started.

In October of 2017, terrorists from Vulkaria attacked Zamastan and killed over 430 people, and President of Zamastan Zacharias Castovia brought a new string of coalition forces with Cadair into the nation in the form of airstrikes at the request of President Brooks. The Zamastanian and Cadairian airstrikes halted in May 2019 under orders from President Anya Bishop, though the conflict had escalated.

By the second half of 2018, independent observers noted that reforms in Vulkaria had considerably slowed down, corruption did not subside, and the economy of Vulkaria was still in a deep crisis.

By December 2019, more than 39,100 people had died (largely civilians) in the conflict, according to Zamastanian figures. The M.L.F. and V.N.A. had largely slowed their foreign terror operations since June 2019, but they had continued their insurgency and strikes within Vulkaria. On December 26th, 2019, a suicide attack killed 48 people at President Brooks' campaign rally in Amstelveen, bringing condolences and words of support from across the IDU.

On January 2nd, 2020, terrorists affiliated with the M.L.F. launched attacks on Zamastan, Legionas, Gardavasque, Libertas Omnium Maximus, Eiria and Xiomera, and several sites around Vulkaria, including the embassies of Shuell, Shen, a Byzconian school, and a Laeralian naval vessel. The attacks killed over 1,490 people world-wide, sending heads of states and governments into a coalition to help the Vulkarian government hit back the terrorist and rebel forces in Northwest Vulkaria.

On January 4th, 2020, Farhen Brooks won reelection to a third four-year term, and vowed that the Zamastanian-led Coalition, involving troops from most countries affected in the terror attacks, would stop at nothing to defeat and destroy the M.L.F. and V.N.A..

Zamastanian forces reinforced the presence of troops at Upol Military Base in Vulkar, as well as several sites in key cities along the M.L.F. controlled territorial border, including Godenia and Lacarno. President Farhen Brooks authorized an additional force of 60,000 to supplement the already present 3,000 troops. Legionas also sent a large supplementary force, which focused its attention to the westernmost section of the battle-zone near the border of Zerphique, assisted by Eirian and Shuellian forces. Along with Libertas Omnium Maximus, Shen joined Zamastanian forces in the easternmost portion of the battle-zone, while the majority of Arcadia-Dezeberian and Byzconian forces assisted in the south-central zones. Xiomeran forces, operating under commission of Vulkaria's government, also focused on this zone. Ruskayn mercenaries were also sent into the battle zone to undertake contracted missions such as bunker destruction, as well as to collect bounties placed on terrorist leaders. Gladysynthia also participated in the war, providing limited reconnaissance for coalition forces.

On February 27th, 2020, Zamastanian officials estimated a heavy increase of refugees from the conflict zones in Vulkaria, approximating to an upwards trend of anywhere from 60,000 to 200,000 refugees in 2020.